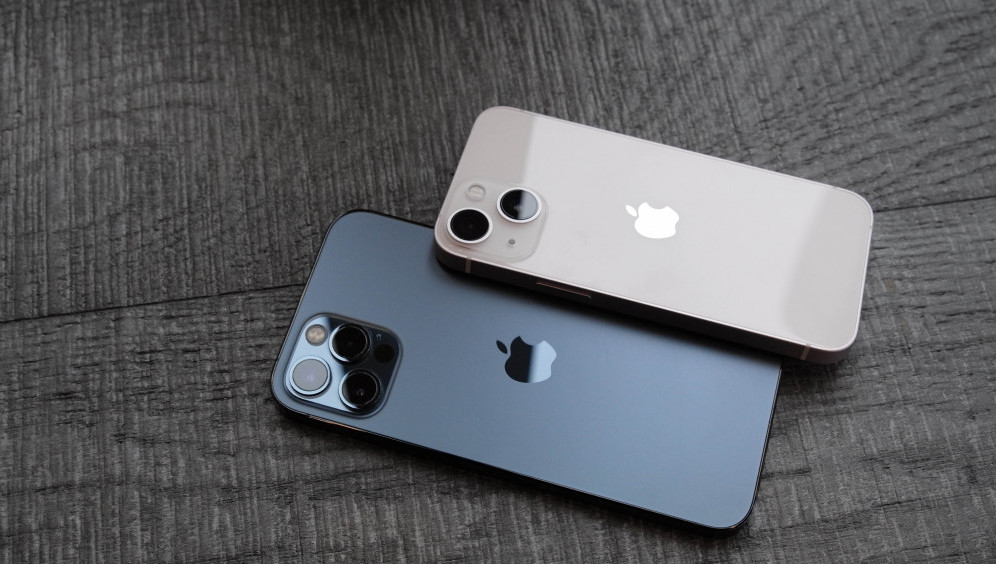 Apple is among the few companies that still produce phones like iPhone 13 mini for the users who want comfort over show off. The device looks small but has all the features of a regular iPhone 13 and Apple has done extremely well to include a great pair of lenses and a bigger battery in a small form factor.

The camera and battery life are the two areas that most people are considered when they purchased an iPhone because generally the in-hand feel and performance of an iPhone are always great.

That’s why this year Apple doesn’t change its smartphone design and all four devices including iPhone 13 mini are almost identical in terms of looks. Although the size and internals are different in each model.

The 5.4 inches iPhone 13 mini is very comfortable for one-handed use and scrolling, swiping, dragging, dropping everything feels natural and easy. Not only that but the aluminum frame with brushed paint is nicely grippy and although fingerprints do stick around they aren’t too visible because of the matte finish.

The iPhone 13 mini is identical to the iPhone 12 mini it’s practically equal in size and most of the design is the same although there are some big upgrades in terms of software and hardware.

The new iPhone 13 mini sports a new diagonal camera setup, a new A15 Bionic chipset, the latest iOS 15 same as iPhone 13, the only difference is the battery which is less compared to other iPhones.

Although Apple claims the new iPhone 13 mini offers much better battery life compared to the previous generation and it seems true the new phone lasts longer but does not excel in terms of battery life. 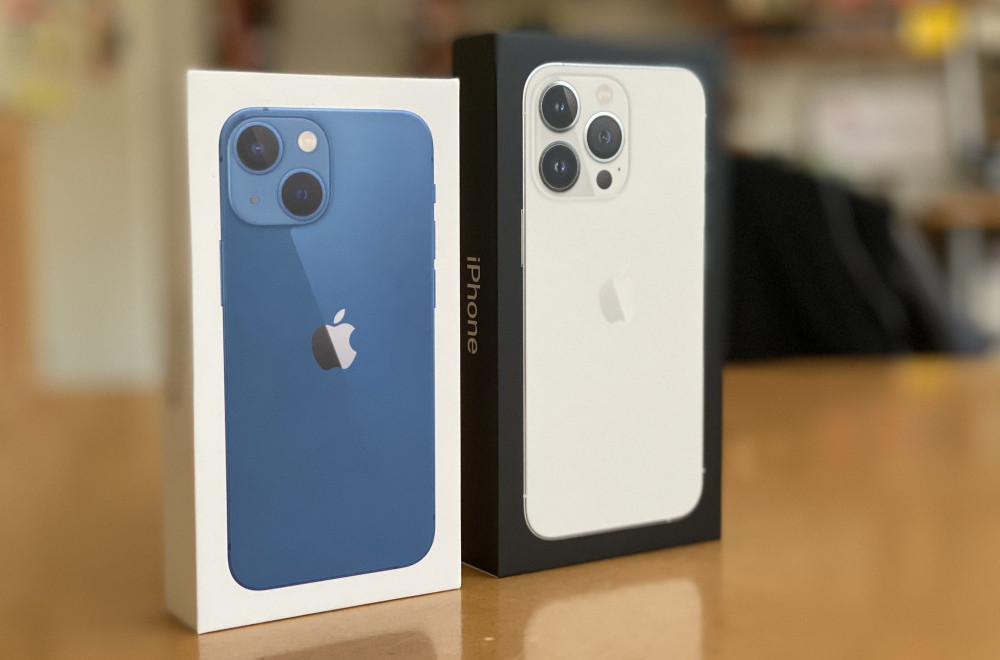 Apple launches the new iPhone 13 mini along with the other three iPhones on September 14th and right now these are available for purchase.

The new iPhones are available in all leading global markets including the US, UK, Canada, Australia, Europe, China, Japan, India, and many others. You can directly go to the official site or any other e-commerce site like Amazon, e-Bay, Flipkart, Reliance Digital, AT &T, Verizon, Tmobile, Sprint to purchase these iPhones.

There are five color options available for purchase Midnight, Starlight, blue, pink, and Product Red and three storage options like 128GB, 256GB, and 512GB. In terms of RAM, there is only one 4GB option available which is less compared to iPhone 13.

Apple is running their trade-in program in some countries where you get your iPhone 13 mini by paying a small amount monthly after choosing your service provider and exchanging an older smartphone. The eligible phones are listed on the website. The EMI options are available for 3 to 36 months and the rates are different from bank to bank.

The Specs of iPhone 13 mini:

The Design and Display: 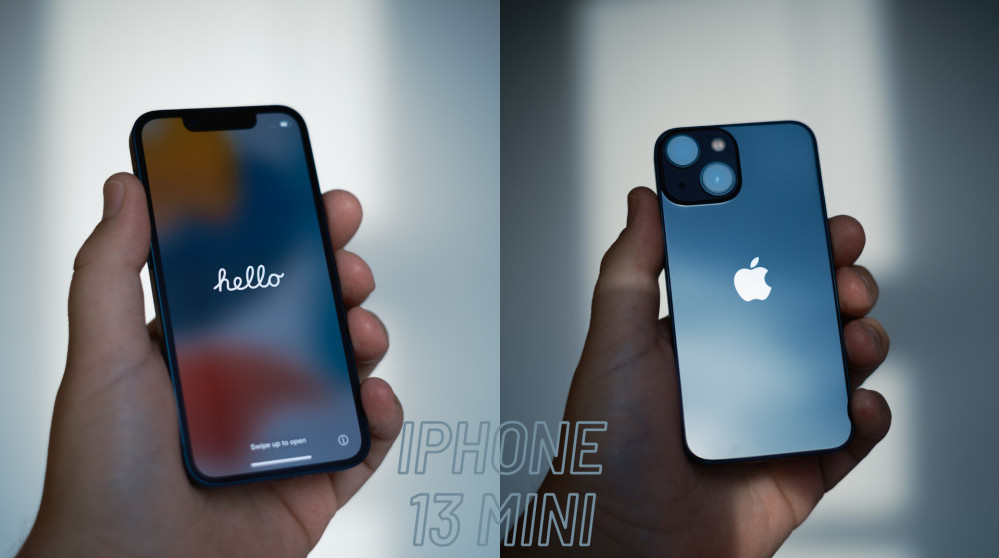 Look wise the iPhone 13 mini is similar to iPhone 12 mini but when you hold the device you probably notice the changes. I must admit the small 5.4-inch phone has felt perfect in hand and it’s not heavyweight just 141 Grams.

The Aluminum frame is nicely covered by Gorilla glasses and this time Apple makes it more sturdy and oleophobic coating resists more fingerprints.

The phone measures 5.18 inches in height, 2.53 inches in width, and 0.30 inches in depth and is very comfortable to use with one hand.

On the right-hand side, we have the power button, and on the left side a Volume up-down button, a ring/silent slider. On both sides, the button placement is a little lower than the previous iPhone 12. At the bottom, a Lightning connector, built-in Microphone, and Speaker grill.

On the bottom of the left side, you find a sim slot for inserting your nano sim. iPhone 13 models support traditional dual SIM by using physical nano-SIM and eSIM, but they also work with two eSIM at the same time.

At the back, Apple somehow manages to include the sensors of last year’s iPhone 12 max but placed them diagonally to save more space.

The super Retina OLED display is not the brightest but the display supports 2360×1080 pixel resolution with 476 PPI and it helps the screen to look brighter and crispier. The SuperRetina XDR display is 28% brighter up to 800 nits for regular content, 1200 nits for HDR.

The iPhone 13 mini display has rounded corners that follow a beautiful curved design, and these corners are within a standard rectangle. The screen supports Dolby vision with HDR 10 which means you can stream high-definition content and the screen produced vibrant colors.

Another big change is a narrower notch. Apple boasts that it’s 20 percent smaller, but it’s also deeper than before, so this might not improve anything. Unlike its bigger pro siblings the13 mini’s refresh rate stays at 60 hertz but it does have a touch sampling rate of 120 hertz.

This is the best user experience you’ll have on such a compact display and if you’re a fan of small phones you’ll enjoy using it. It also sports apple’s true tone technology and has excellent color accuracy.

New wider sensors take more space so Apple has to adjust the placements of the sensors and create a new diagonal set of cameras. The rear camera supports 4K 60 FPS. The Front cam is also a 12 Megapixel 23mm wide sensor equipped with Electronic Image Stabilization and HDR. In the video department, it supports 4K 24/30/60 FPS and the video quality is great.

During the day the main camera shoots excellent photos they’re sharp with a lot of detail great contrast and low noise the dynamic range is praiseworthy too. On the other hand, the ultrawide camera shoots some of the widest photos we’ve seen.

In the night, mode triggered automatically and samples from the main camera looked nice exposure was balanced contrast was great and color saturation was superb detail and sharpness were outstanding as well.

In terms of Video in ideal light conditions the iPhone 13 mini can record up to 4k video at 60 frames per second with both cameras all videos are digitally stabilized and they all feature expanded dynamic range thanks to smart hdr. Although I miss the macro shots because the iPhone 13 mini doesn’t have any macro lens so I have to rely on the main 26 mm 12 MP sensor.

All other camera features like Photographic style and Cinematic mode and others are the same as iPhone 13 because the two uses the same sensors and I already discussed all the new camera features in my iPhone 13 post, go and check that out for more info.

Like the rest of apple’s iPhone 13 lineup, the mini has the A15 Bionic chip where it differs in that it has 4 GB of RAM instead of the six gigabytes on the pro models. The A15 Bionic is the fastest processor integrated into the iPhone and way ahead of any other Android device.

The new A15 is the custom 5 nm chip made by Apple and offers a 6-core CPU and 4-core GPU. Out of 6 cores, 2 are performance booster cores and the remaining 4 are energy-efficient cores. The GPU is more powerful to handle any rough situation like rendering to gaming with ease.

The base storage on the least expensive iPhone 13 and 13 Mini has been increased to 128GB which is a welcome move from Apple but the RAM is still 4 GB. We expect this time more RAM but anyway you can’t feel any lag or stutter when you operate the device.

The biggest weakness of the iPhone 12 mini was the weakest battery life and it’s a fact that the battery life on the 12 mini just wasn’t that great you could barely get through the entire day. This time Apple packed a bigger 2438 mAH battery inside the iPhone 13 mini.

Although this improves the screen on time by one and half hours but does not solve the issue still mini struggles to go through a full day after heavy usage.

After some camera works, video playback, surfing the internet, using Instagram and some tweets, watching some HD content on Netflix, playing games, some casual and office calls on voice and facetime, the phone lasts only till 7 PM.

Apple in their event claims that now you get Up to 1.5 hours of more battery life on iPhone 13 mini and it’s true but the device supports 18Watt fast charging which is pretty slow and it takes 35 minutes to charge the phone 50%.

The A15 Bionic performs equally well with the combination of the new iOS 15. The phone runs smoothly and you don’t feel any difference when compared with other high-end iPhone 13 Pro or Max in terms of performance.

The new iOS 15 has all the new features and improves the usability of the iPhone. One of the more noteworthy improvements arrived with notifications management now you have focus profiles that determine when you receive certain notifications so you get what you need whether you’re in work mode or if you’re playing games.

There are tons of new customization and new features added to the iOS 15. The Siri (voice assistant), message, Sound and Mic mode, Emoji, Wallet, Helth, spotlight, Photo, privacy, iCloud+, note, translate, widgets all the apps are modified to give you a better experience altogether.

Facetime and safari have also gotten significant upgrades and the UI has newer design elements that are now rounder and the icons are bigger compared to the previous versions.

Its looks nice and easy to navigate any apps is easier but due to the small screen size in iPhone 13 mini sometimes accidental touch occur. It’s not the fault of the OS and mainly because we are very much used to the big screen display and it takes time to adjust our touch behavior.

The other thing I noticed is if you’re using your phone a lot to read you didn’t feel like reading on a teeny tiny display yes the font is a little bit smaller but you can equalize that by going into the settings and reducing or increasing the font size. You only lose two words per line and that’s not that big deal when compared to the iPhone 13 or 13 pro.

We have a dedicated article about iOS 15 and discussed the all-new features elaborately, go check that out for more info.

Should the iPhone 13 mini cover everything well?

Every year with every new phone companies are upgrading their devices both internally and externally. Most of the time new phones are built with better internals and look great than their predecessors. The trend of making a big screen powerhouse is trading right now. So every other company builds huge phones and is less interested in making compact phones.

But companies like Apple like to believe there’s still a market for smaller phones and not just any smaller phones but flagship ones. Undoubtedly the iPhone 13 mini is the only small flagship phone out there in the market.

I like small phones and I truly feel like it’s the first small phone in a very long time that doesn’t sacrifice anything major. Only the screen is small and the battery capacity is less compared to other flagships.

For a normal or moderate user, the phone should last for one day but if you’re a heavy user who wants all usability from your iPhone 13 mini then you have to plug the device in the evening.

Although the phone excels in every department it has some flaws like if you loved to watch movies and videos mostly in landscape mode then you are probably irritated by a small screen with big bezels and the narrower notch takes some screen space too.

Lastly, the most important part is iPhones are always expensive and every year the Pro and Pro Max versions are raised their value so in that sense the iPhone 13 mini should be a great choice for those who want a pretty solid iPhone without spending a huge amount.

Anyway, that wraps up my review if you have any more questions about the iPhone 13 mini please let me know in the comment section down below.