The Surface Duo was initially unveiled at Microsoft’s hardware event in October 2019 and finally went on sale in September 2020. Exactly after one year, on September 22nd Microsoft launched the Surface Duo 2 with a more practical approach and lots of refinements.

Surface Duo is an Android-based dual-screen foldable tablet made for all your office and casual works in a small form factor. It’s the first razer thin phone with a 360-degree hinge and two five-inch displays. Although the First generation Surface Duo is heavily criticized for its buggy software and imperfect implementation.

With the Surface Duo 2, Microsoft takes one step further to bring the dual-screen concept to the masses with some much-needed improvements.  This time Microsoft works on all areas and launched a much-improved Surface Duo 2 with better hardware blended well with Android 11 and overall makes a good multitasking device.

Apart from the hardware, the design has been refined all around, making what was already an elegant piece of hardware into a device that you’ll want to show off. This time with more practical approach makes the Surface Duo 2 much more comfortable to use on a day-to-day basis.

The two AMOLED screens are bigger and many Microsoft and Google apps are taking greater advantage of that opening up lots of multitasking opportunities.

The new Surface Duo 2 comes with a stronger processor, much improved triple rear camera setup, better battery backup, and most importantly the device runs on Android 11 along with many Windows 11 Applications.

The Surface Duo 2 is available for purchase and you can buy the unlocked version for all carriers. The device is already available in all major countries like Australia, Canada, France, Germany, United Kingdom, U.S, Austria, Belgium, Denmark, Finland, Italy, Ireland, Netherlands, Spain, Sweden, Switzerland, and Japan.

The price is high compared to other devices featuring similar specs but apart from the technology, it involves a great amount of craftsmanship to produce a Dual screen foldable Tablet like this. Generally, the price always remains on the higher side.

There are two color options available for purchase the Obsidian which is more like greyish black and the greyish white color called Glacier.

You can buy this device and other Microsoft products from Amazon or eBay. eBay Only Offer – Save On Select PC Devices, Starting at $199

The Design and Display:

Design-wise the device looks similar to the first generation but there are lots of things that changed inside and outside. Microsoft this time also goes for two different screens rather than using a foldable display that bent from the inside.

Surface Duo 2 is made of Corning Gorilla Glass from the inside out. The front side is made of Gorilla Glass Victus to give you extra sturdiness. The kind of black and grey colors look great and in the Middle, we have the famous Windows logo looks elegant.

The biggest difference, and one that’s immediately striking, is the new camera. The Surface Duo 2 has a triple-lens 16mp camera, whereas the original had just a single lens. The camera bump is somehow restricted you from folding the device completely 360 degrees but we never complained because it’s a much-needed inclusion.

And Microsoft has taken great care of the lenses as the camera bump is recessed slightly under a border that’s constructed from plastic and rubber. It always protects the camera modules from scratches and accidental drops.

On the right side, we have a Fingergerprint reader mounted also works as a power button, and just above we have the volume controller. On the bottom, we have the USB type C for charging and a sim card tray for nano sim.

The tablet features dual stereo speakers one at the bottom and another placed at the top side and both produced great quality outputs.

Surface Duo 2 has 8.3 inches display which is diagonal across both screens individually each one is 5.8 inches and the inside edge of each screen is a little rounded now which lets them close the gap between the screen so there’s a little less space between them.

When you open the tablet you noticed two separate 5.8-inch screens and altogether they work as big 8.3-inch screens so you have the choice to either use a big screen or split it between the two.

Here Microsoft is using a slightly curved display around the middle which enables the screens slightly exposed down the spine when closed. This allows Microsoft to build a ‘Glance Bar’ which can be used to notify the users externally whenever they had a notification, incoming calls, and battery charging status.

If you look at just the right angle you’ll be able to see some notifications pops up or in case you silence the device you can see the time and the number of missed calls and messages you received. Although it’s a tiny little screen but very useful on some occasions.

The Primary Dual Pixelsence Display has a 2688×1892 resolution and the Single Pixelsense display has 1344×1892 pixels, the pixel per inch density is 401 also supports 90 Hz refresh rate and HDR.

They offer rich contrasts and colors and a great viewing experience overall you noticed the smoothness when you scroll down articles or your social feeds.

Microsoft also tweaks some settings to improve the viewing experience, they introduce a slight curvature to the interior edges of the screens this adds to a more book-like effect so that the Surface Duo 2 made it easier to read and write. 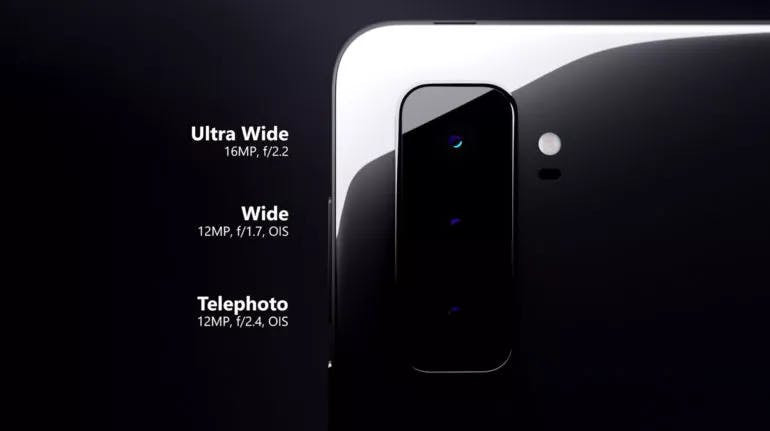 The 12-megapixel main sensor with optical image stabilization (OIS), the 16MP ultrawide camera with a 110-degree field of view, and a 12MP telephoto lens with 2x optical zoom and OIS.

Microsoft says these cameras will provide a flagship-level experience, including support for features such as portrait mode with adjustable depth control and low-light and Auto HDR photography improvements.

On the videography, these are capable of shooting 4K 60 FPS videos and 120/240 FPS slow-motion videos.

The coolest thing about it is how Microsoft has implemented the camera app and the photos app so you can view both at the same time. You can hold up the device takes a picture and then immediately see a preview of the picture full screen on the screen on the left.

Microsoft says the Surface Duo 2 supports low-light and nigh photography aided by computational processing via a new camera app exclusive to Surface Duo 2.

Processor and Battery of Surface Duo 2:

In terms of performance, there is a big upgrade compared to the first generation, the new Surface Duo 2 is packed with Qualcomm® Snapdragon™ 888 5G Mobile Platform processor. The flagship-grade processor and 8 GB of RAM make the device super first for multitasking and other day-to-day activities.

Microsoft builds the Surface Duo 2 in such a way that it can run multiple Windows and Android-based apps swiftly without any giggles and the powerful hardware supports it completely. On top of that, it can run Microsoft’s Xbox Cloud Gaming service anytime.

Snapdragon 888 is very power efficient and supports both category millimeter-wave and Sub-6 to offer you maximum download and upload speeds universally. It will also pick up support for NFC, allowing for contactless payments at subways, restaurants, and other places — a feature that is becoming common to use during the pandemic.

The Surface Duo 2 features a 4449 mAh battery which will give you 15.5 hours of video playback and 28 hours of talk time. We’ll have to put it to testing to see how this translates in the real world. On the plus side, it does support fast charging, but you’ll need to purchase a 23-watt USB-C adapter separately.

The Software and Gaming Features: 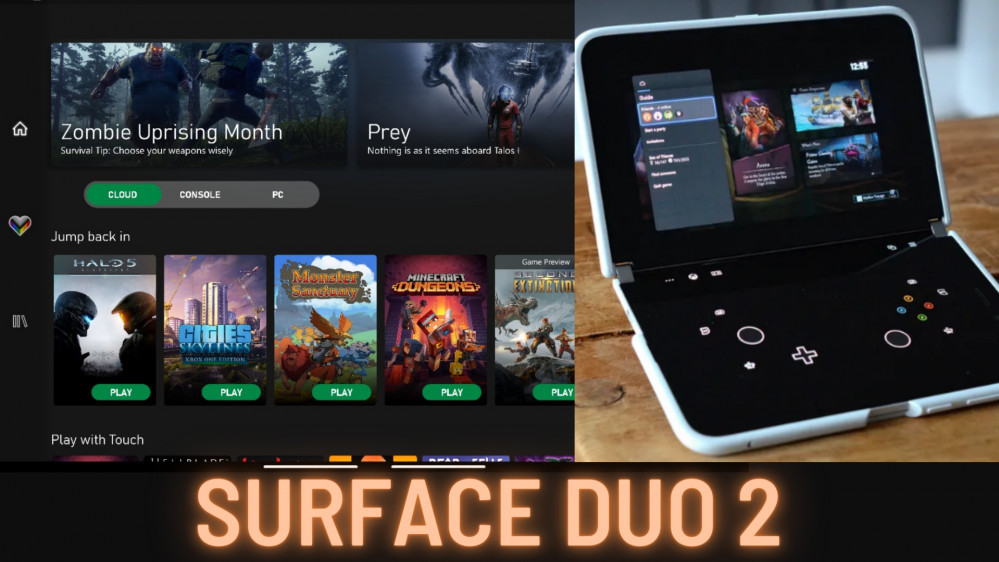 When you first time using the device you probably feel like using a Windows device because of the heavy customization and WIndows applications inside the Surface Duo 2 but actually, it runs on Android 11 out of the box.

There are lots of Microsoft apps and utilities that are pre-installed on the Tablet and the go, you can use all the famous office and utility tools on a 5.8-inch device.

The software and UI is the one section where the previous surface device struggles a lot mainly because of the compatibility issue but this time Microsoft works on that and releases a more responsive device that can jell well with all the Android apps as well as Windows apps.

This time Microsoft took great advantage of all the new features of android 11 and create the UI more intuitive and practical although it has some barriers like two screens separated by a hinge.

The camera and photo app make use of both displays intelligently, and the picture quality (plus improved triple lenses, giving you wide, telephoto, and ultra-wide) looked strong. The shifting from telephoto to the main sensor and back to the front camera is smooth.

Microsoft has gone ahead and showcased some new features in terms of Gaming means you can use that second display as your controller for android games like Asphalt 9, Pokemon Unite, Mortal Combat, etc where you can see the controller on the second screen and operate instantly.

You can also play all the favorite Xbox Games like Forza Horizon, Minecraft Dungeons and Monster Sanctuary, and many more either in ‘tent’ mode by using the second screen as a touch controller or ‘Laptop’ mode where you connect your Xbox controller with the surface Duo 2.

All the games are played on Xbox GamePass a cloud gaming service recently integrated with Android 11. Xbox Game Pass offers access to hundreds of high-quality games on Xbox and PC, and Xbox Cloud Gaming through Xbox Game Pass Ultimate elevates the Xbox brand to new heights.

Finally, what do we think about the Surface Duo 2?

The first-ever Surface Duo device has some pretty unique features but it fails to deliver to its full potential. The device has pretty rough patches and most of the buyers have a terrible experience with it. The buggy and imperfect implementation of software creates a mess so the device never comes up from that loop.

Although this time it looks like Microsoft has done some hard work to create a dual-screen foldable tablet more carefully and so far it looks good on paper. The inclusion of a new camera module, better quality display, powerful processor, improved battery, and on top of that the heavily customized Android 11 is there to take full advantage of two displays.

Our first impression is quite promising this time and it seems like the software takes great advantage of this powerful hardware and creates a device that is great for multitasking and all your office work.

The Surface Duo 2 is the perfect device for those who want a mobile device that is easily carried out and has all the functionality of Microsoft office tools and utilities along with Android 11. So as per our understanding, the Surface Duo2 is not for everyone and more for enterprises that want zero tolerance and more productivity on the go.

Do you agree with us or fells differently or already using one for your work, Please share your views and experience in the comment section below.